Character Design and Sculpting for Concept

In this class, Character Art Director Josh Herman covers his 3D character design and modeling process from an intial concept to a final rendered illustration. Beginning with an exploration in ZBrush and Photoshop as Josh develops the concept, he quickly explores ideas that allow him to arrive at a design direction. Returning to ZBrush to develop further, he discusses costume sculpting, posing and layout while using Keyshot to visualize the scene's lighting setup. Revisions are then made to the character's costume and head sculpt which lead to final posing. Marvelous Designer is then used to efficiently create realistic cloth details that are used in the final Keyshot Renders. As the final illustration takes shape, Josh then adds the finishing touches in Photoshop and shares his workflow for layering, blending, painting and color correction. For those interested in combining 2D and 3D techniques for quick concept illustration, this title offers an array of valuable insights by leading industry artist. 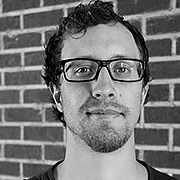 Josh Herman was raised in Colorado, where he attended a local animation college. After graduating with a bachelor’s degree, he moved to Hollywood in 2008 to continue his education at the Gnomon School of Visual Effects. Immediately after graduation, Josh began work at Legacy Effects on projects such asReal Steel, The Amazing Spider-Man, Total Recall andThe Avengers. Josh left Legacy to try his hand at games, working for Naughty Dog on Uncharted 3: Drake’s Deception. He was then recruited by Marvel Studios, where he worked on films such as Iron Man 3, Thor: The Dark World, Captain America: The Winter Solider, Guardians of the Galaxy and The Avengers: Age of Ultron. He is currently developing his own IPs for short stories and games, and has recently contributed to Essence: Creatures from Ballistic Publishing.