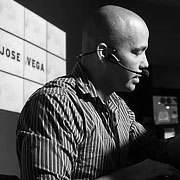 Jose Vega is a Principal Concept Artist who has been working in the entertainment industry for over a decade, initially launching his career in 2012 as a concept artist and illustrator. He’s worked for a number of clients, including Riot Games, Wizards of the Coast, Fantasy Flight Games, Paizo Publishing, Hi-Rez Studios, and many more. He worked in the role of Background Supervisor for the Netflix animated show, Castlevania, and regularly contributes his talents to the video game and movie industries.