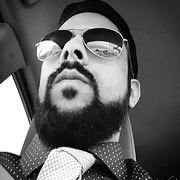 Fred Gago is Storyboard Artist at Frame Machine who has spent more than a decade providing everything from Storyboards to Character/Creature design, as well as UI and Graphic Design for a multitude of clients that include Disney, 20th Century Fox, NBC Universal, and Adult Swim Games.

He has contributed to a variety of television projects such as Horizon Forbidden West, Horizon Zero Dawn: The Frozen Wilds, Castle Rock, Warrior, American Horror Story: Freak Show and Banshee.