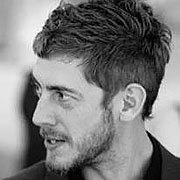 Aaron Beck is a New Zealand born Conceptual Designer known for his iconic and unique work in the film and video game industries. A life-long love of nature, science, and mechanics have helped him create a unique aesthetic based on an application of functional real-world technical solutions pushed into the realm of futuristic science fiction.

Aaron started his career as an animation director and animator, after falling in love with animation while studying illustration at Victoria University in Wellington, New Zealand. After a few years in the animation industry Aaron left to pursue freelance illustration, animation, photography, and film making, while traveling overseas as much as possible, fulfilling his love of exploring new places.

In 2006 Aaron joined Weta Workshop, an Academy Award winning production studio in Wellington, New Zealand. Over his eight years with the company as a Senior Conceptual Designer Aaron was involved in many big budget Hollywood blockbusters and other exciting projects, helping create a unique vision for films including Avatar, Elysium, and Mad Max Fury Road. After leaving Weta Workshop in 2014, Aaron worked as a freelance Conceptual Designer, providing unique work for many exciting video game properties, including Call of Duty Black Ops III, and FigureHeads, for a variety of clients around the world. In 2016 Aaron relocated to Los Angeles California, to realise a childhood dream of living and working in this iconic city. He is currently working in the video game industry, the most recent project being involved with Activision and Infinity Ward as a Principal Artist on Call of Duty, Infinite Warfare.

In his free time Aaron enjoys many hobbies, including an active life in the vibrant car scene in Los Angeles, working on his 1973 Plymouth Barracuda car project, photography, Brazilian jiu jitsu, and many personal art and design projects.